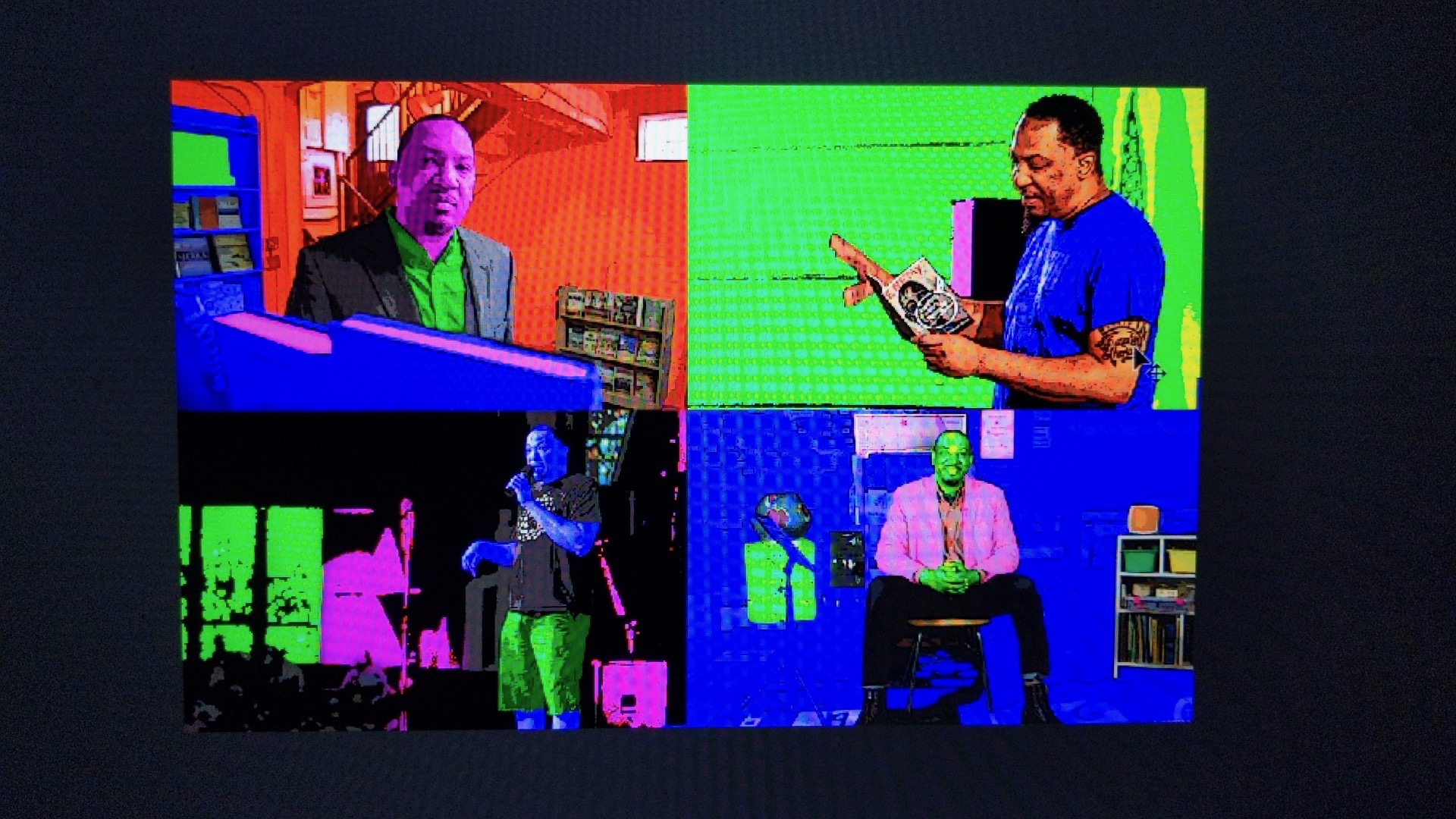 Christopher Massenburg, better known as Dasan Ahanu, is a public speaker, organizer, curator, educator, poet, spoken word artist, educator, songwriter, and emcee, and loyal Hip Hop head born and raised in Raleigh, North Carolina. He is co-founder and managing director of Black Poetry Theatre, a Durham based theatre company that creates and produces original poetry and spoken word based productions. As an active participant in poetry slam, Dasan has competed regionally and nationally as a founding member and coach of Durham, NC’s own Bull City Slam Team. In 2010 and 2014, Ahanu led the Bull City Slam Team in winning the Southern Fried Southeastern Regional Poetry Slam, the largest regional poetry slam in the country. He also led the team to a 3rd place finish at the 2010 National Poetry Slam and a 2nd place finish in Group Piece Finals at the 2012 National Poetry Slam.

Believing that “with great talent comes great responsibility,” Dasan has also used his skill and resources to aid in developing the community and further social change. He has worked as an organizer on such issues as war, social injustice, worker’s rights, domestic violence and sexual assault; planned and facilitated community programs for Duke University's Center for Documentary Studies; conducted creative writing and performance workshops at middle schools, high schools, and colleges throughout North Carolina; and spent time working with at-risk/court-involved youth. Dasan has been a speaker or workshop facilitator at a number of notable conferences and symposiums. In addition to advocating for further support of poetry and spoken word, he has spoken on topics such as the impact of cultural arts programming, the arts and social justice, Hip Hop culture, Hip Hop pedagogy, and the arts as a tool for literacy. As a resident artist with the St, Joseph’s Historic Foundation/Hayti Heritage Center in Durham, NC he has developed poetry and spoken word programming for youth and adults and worked to grow the Triangle’s arts community. In 2004 he was awarded an Indy Arts Award by Indy Week (formerly Independent Weekly) for his work in arts and activism. Then in 2015 he was awarded the honor again, the first time in the award's history that happened.

As a curator, Dasan has created his own series of shows and collaborated with local promoters to provide some of the best arts and music events in North Carolina. He has worked with notable festivals such as the Art of Cool Festival and Beats n Bars Festival. He has assisted various institutions in presenting art to the community including area museums, art galleries, colleges and universities, and performing art centers. In addition, Dasan has hosted many poetry, jazz, Hip Hop, and cultural arts events across the state.

His work has been featured on National Public Radio (NPR) where he has been noted for his appearances on News and Notes with Ed Gordon and State of Things with Frank Stacio. His writing has been featured in online and print publications. He has been showcased on NBC 17 in for his work with poetry slam. He is featured on the third season of Lexus Verses and Flow aired on TV One. He was featured in a documentary entitled, “Poet Son” that aired on WUNC-TV as a part of the North Carolina Visions film series. In 2007 he signed with NC independent record label Amp Truth Records and teamed with up and coming music producer Picasso to form The Jim Crow Jackson Experiment. Their self-titled debut album was an amazing blend of spoken word, rap, soul, reggae, and blues. The album showcased both artists’ unique talents and was released both domestically and internationally. As a songwriter and emcee, Dasan continues to record and release music with other notable emcees, vocalists, and musicians from NC and along the east coast. Dasan has released three full-length books of poetry entitled, The Innovator, Freedom Papers, and Everything Worth Fighting For: An Exploration of Being Black in America. He has released spoken word albums, the two most notable being, The Darkest Eye and Catharsis.

While an Assistant Professor of English at Saint Augustine’s University in Raleigh, NC, Dasan developed workshops for the English Composition classes while also editing the campus literary magazine, Inside Out. He has also developed new curriculum for the English Department, Liberal Studies Department, and Honors Program. He was active in student development as a member of the Freshman Writing Initiative, a grant supported initiative established to foster student success and nurture student writing and critical thinking. He organized colloquiums, speaker series, and conferences. He also coordinated arts programming on campus and advised the campus creative writing organization, Falcon Poetry Club.

Dasan is also an alumni Nasir Jones Fellowship with the Hip Hop Archive at Harvard University’s Hutchins Center for African & African American Research. He scholarly work is focused on art interventions, creative expression, Hip Hop and popular culture. Currently, Dasan is a visiting professor at UNC-Chapel Hill in Chapel Hill and a consultant working with organizations on art-based strategies. 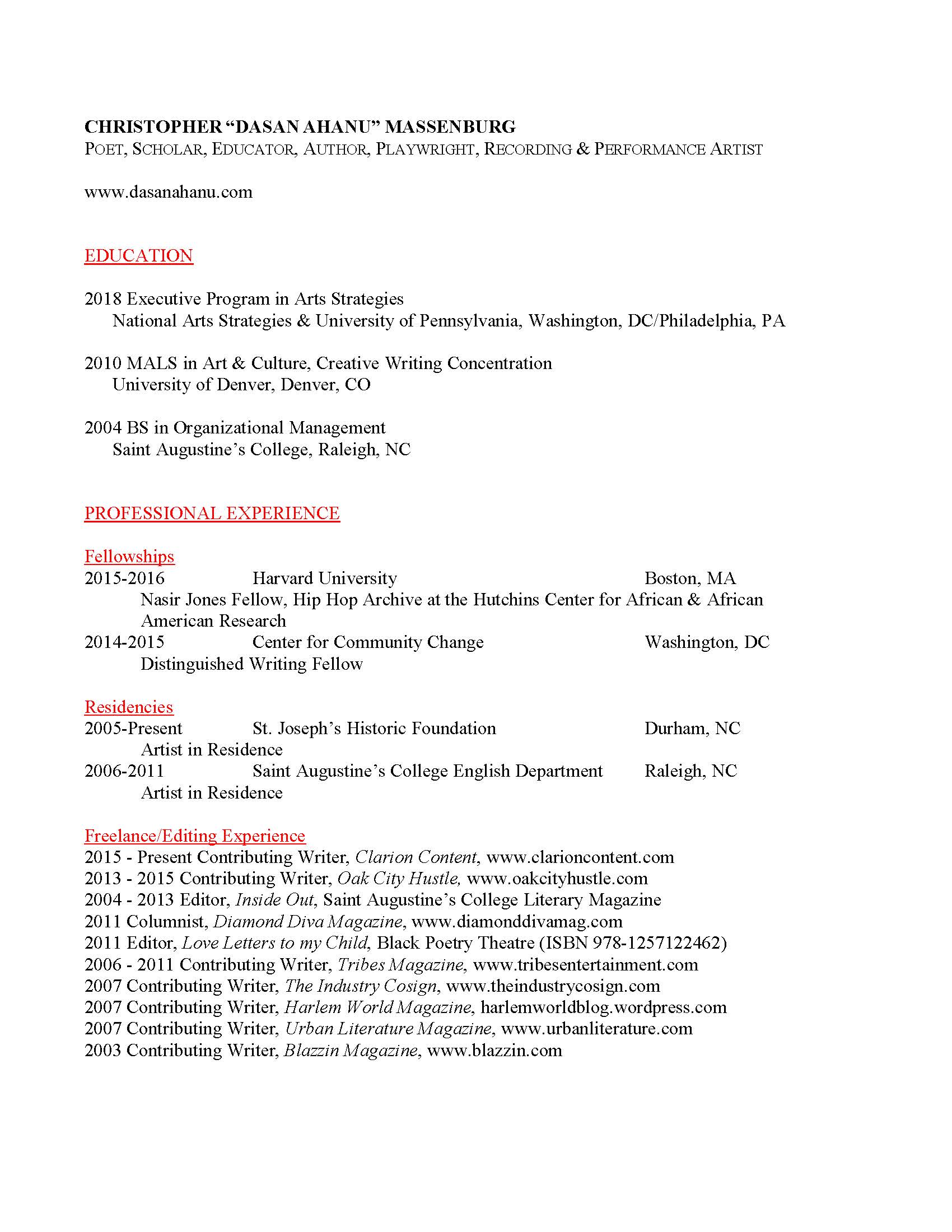 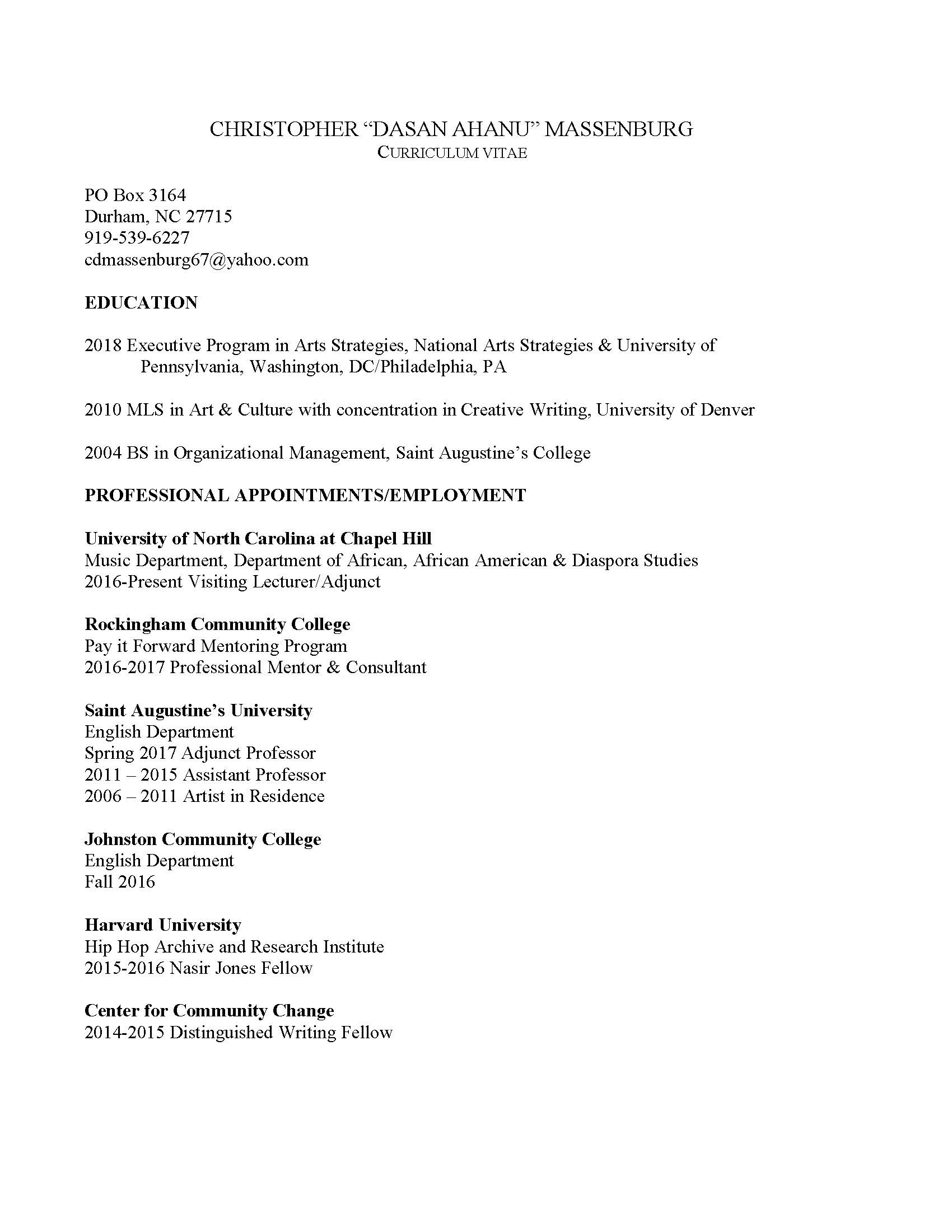 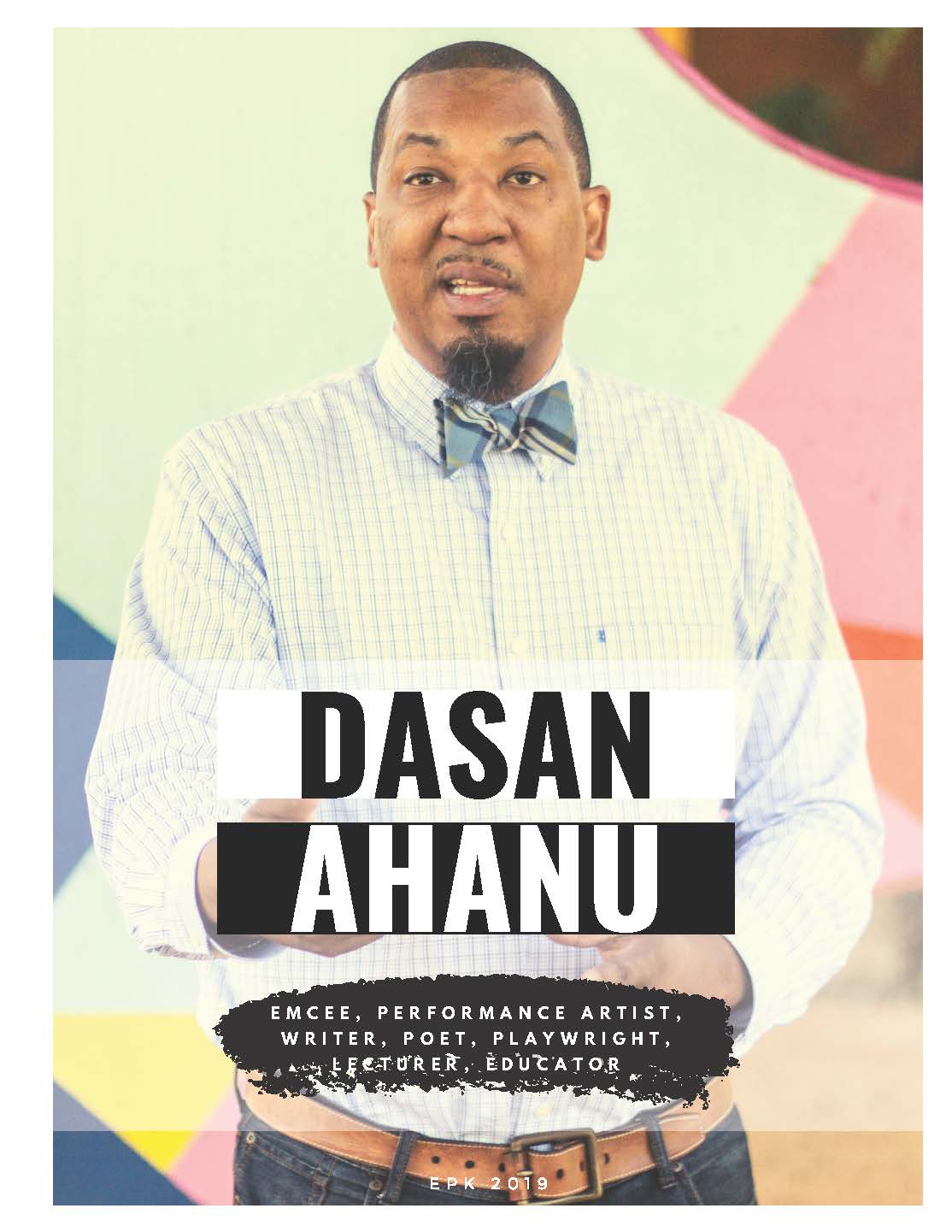 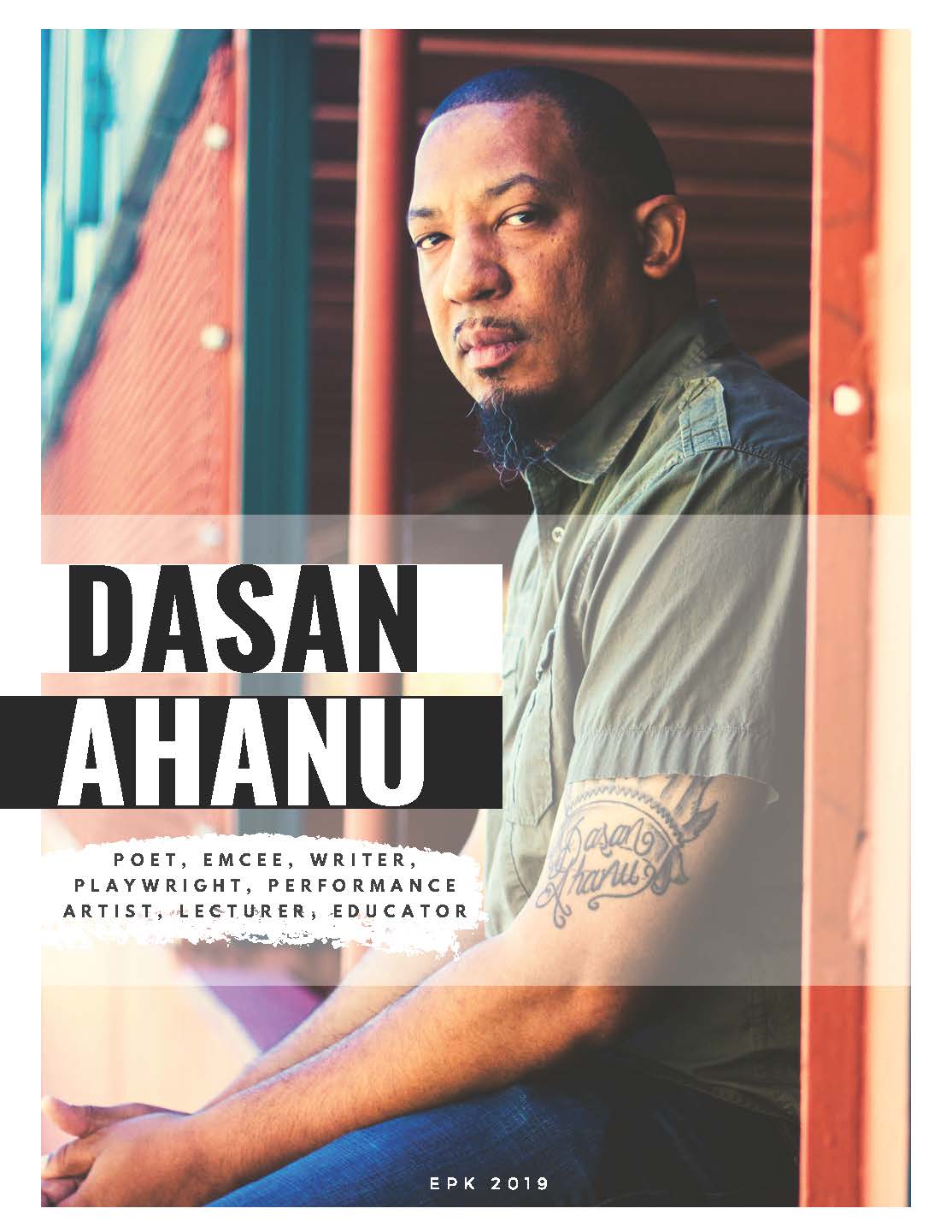